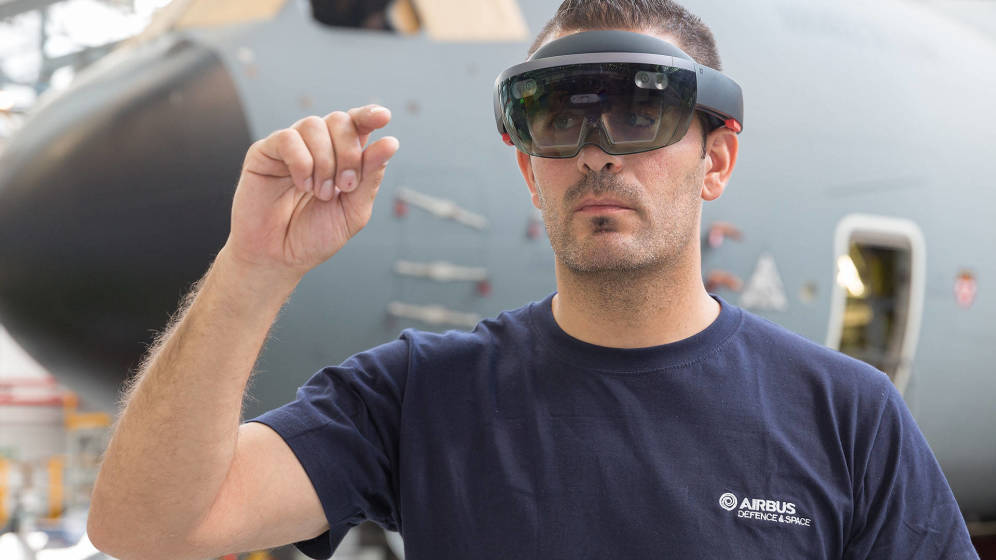 “My mentor used to tell me ‘May luck catch you working’,” says Oscar Muñoz, an Airbus Defense & Space engineer who works in the area of performance and innovation. Thanks to one of his ideas, Muñoz has achieved €6 million savings by undertaking the arduous task of inspecting the A400M, the huge military transport planes. And it was luck, or inspiration, that caught Muñoz in the midst of work. Instead of inspecting the planes manually, why not take advantage of technology.

“Technology existed already in an individual way, but we hadn’t used it in combination. It’s mix of working with drones, augmented reality and so-called ‘assisted work tools’ to eliminate interference and speed up production since we had a transnational team of six people working in different plants, “ added Muñoz. His proposal for a new, more agile review process for the A400M was framed inside a development program spearheaded by Airbus in collaboration with IESE Business School. The program’s aim was to transform ideas in an embryonic state into projects that might improve the company’s production processes.

“Around 200 to 250 ideas are presented and only a few are chosen. Ours was one of six that went ahead,” the engineer explained. Once the selection process has been passed, in which the project has to be presented before the Executive Committee of the Military Airplane branch, IESE enters the scene to help expedite the project and exiting it right before its implementation.

It is at this moment, after hours of accumulated flying hours, when the techniques developed by Muñoz’s team come into action: “The drone makes an in-flight digital analysis of everything that it has seen. If I tell it that a defect has been detected, it’s capable of learning how to seek out similar points in the plane. This avoids checking the plane manually.”

The augmented reality glasses come into play during the inspection to locate the defects detected by the drones. Muñoz describes it as “a red dot” that appears to stand out on the plane that pinpoints the flaw. Although the team still uses tablets, in the future the idea is to automate and execute inspections using smart glasses.

With eight or more thinking heads at the table, Muñoz and his team devised a more agile process that hadn’t been modified in 50 years.

This text is based on an article originally published in Spanish in El Confidencial. Click here to read the original.